LikesnTrends.com
Home General The 10 Most Beautiful Cafes In The World 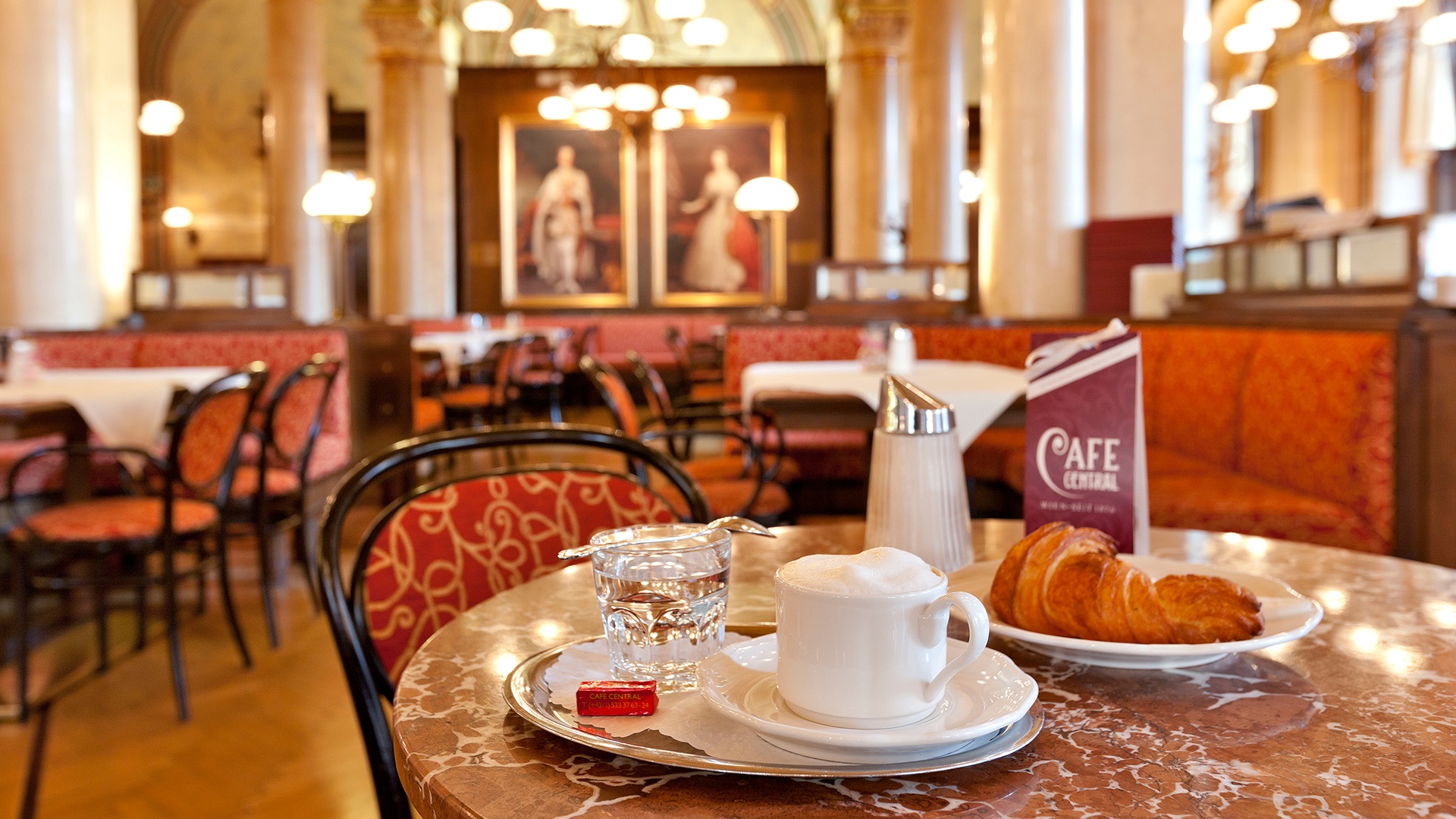 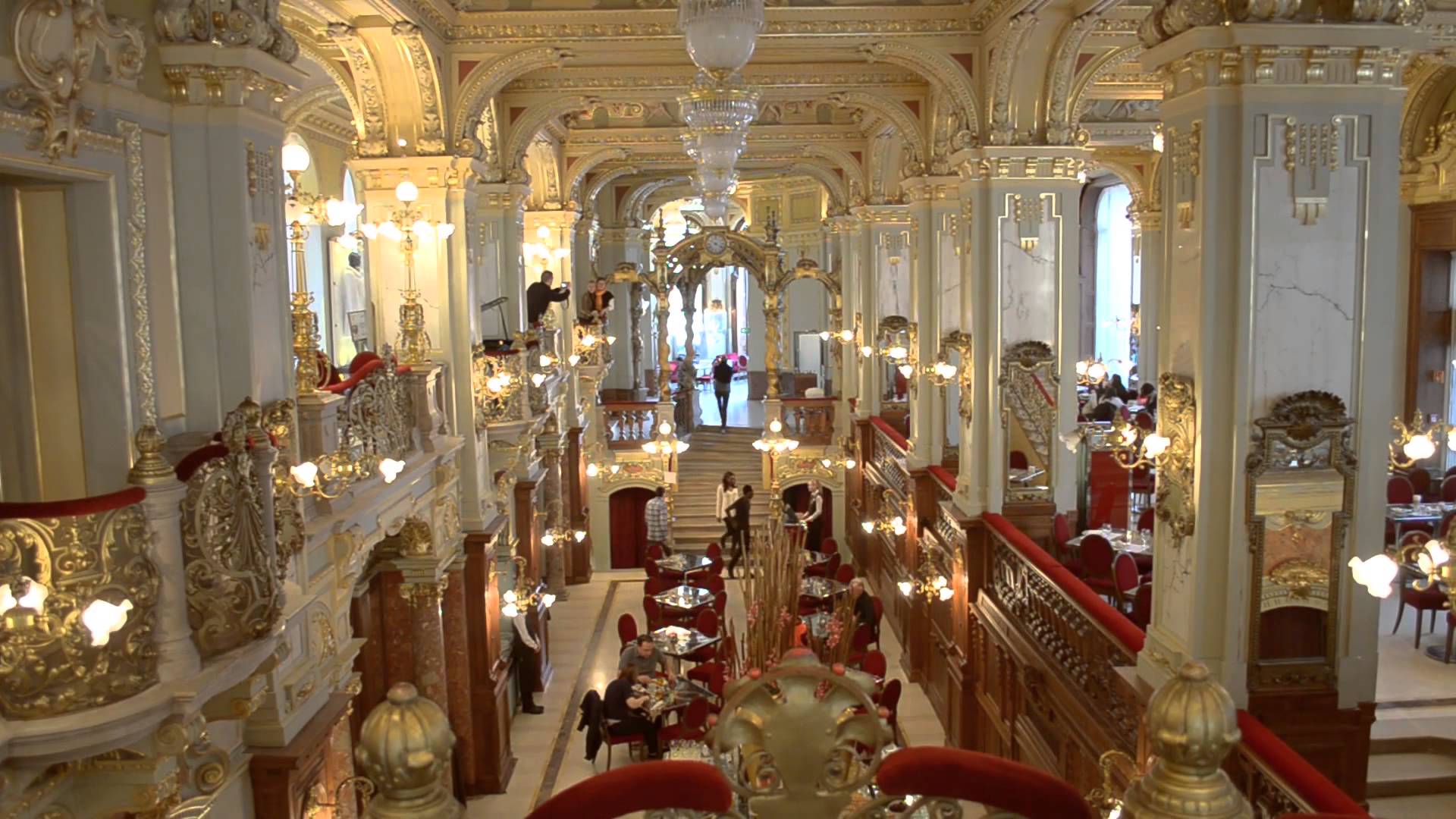 This Budapest legend was the meeting place of artists in the early 20th century. Recently renovated by designer Adam Tihany, it maintains a dazzling gilded interior featuring ornate lamps and paintings on the ceiling mixed with contemporary furnishings. Found connected to the Boscolo Budapest Hotel, it is now both a café and full-blown restaurant, welcoming locals and tourists who sit at the mirrored tables for traditional Italian and local dishes to the sound of chill-out music and often short performances by local actors. 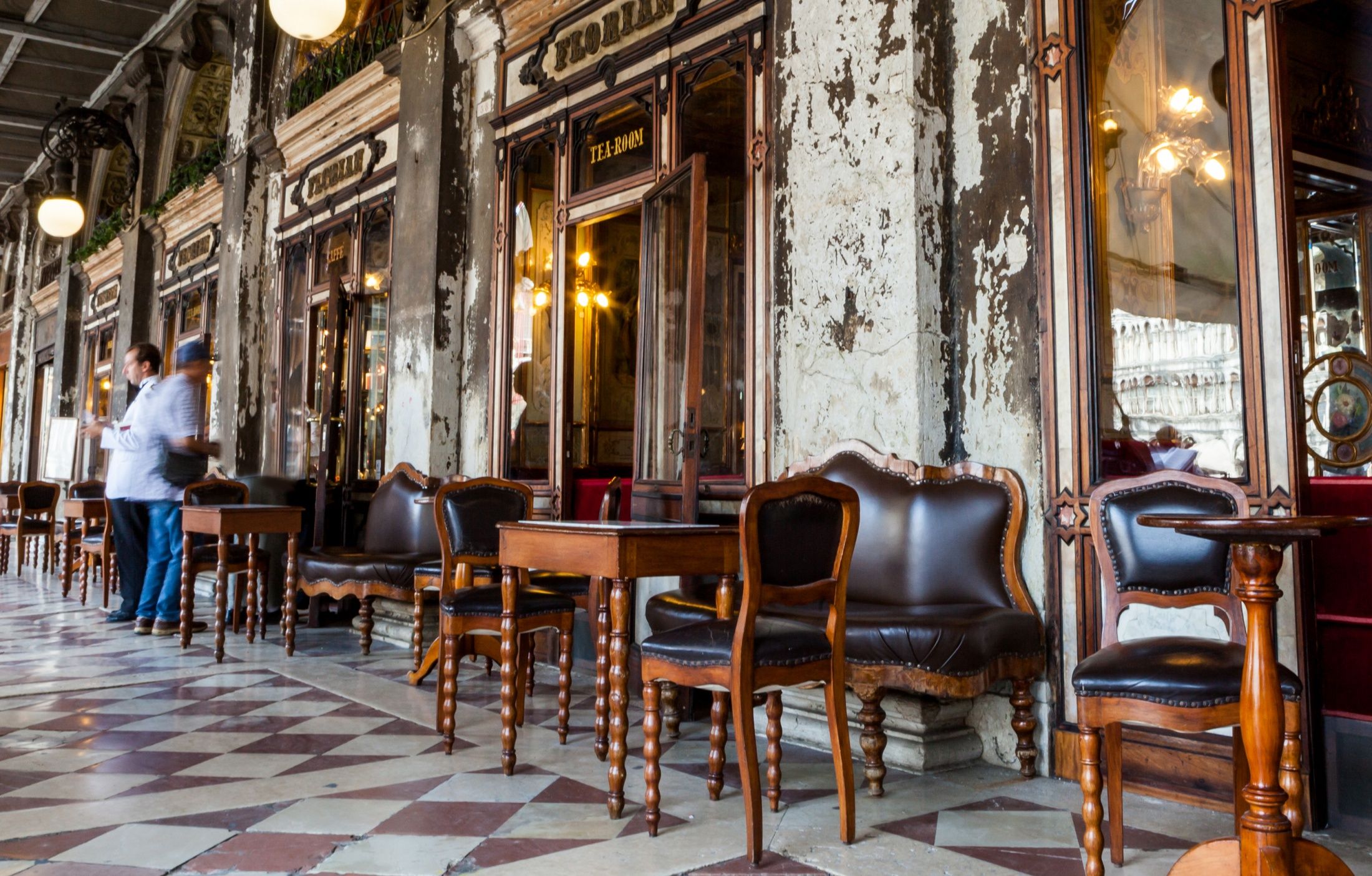 Venice’s grand old days can still be seen in the city’s palazzi, but can only be felt in its historic and beautiful cafes. The most stunning of all is Caffè Florian, taking you back to the 18th century with its frescoed and mirrored interior. It has been the hangout of writers and artists in the past, while in the present it stands as a living museum. As such, don’t be surprised to be charged around ten euros for coffee, but it’s a price worth paying to admire such a stunning place, which is also home to the Venice Bienalle, a contemporary art exhibition running since the late 19th century. 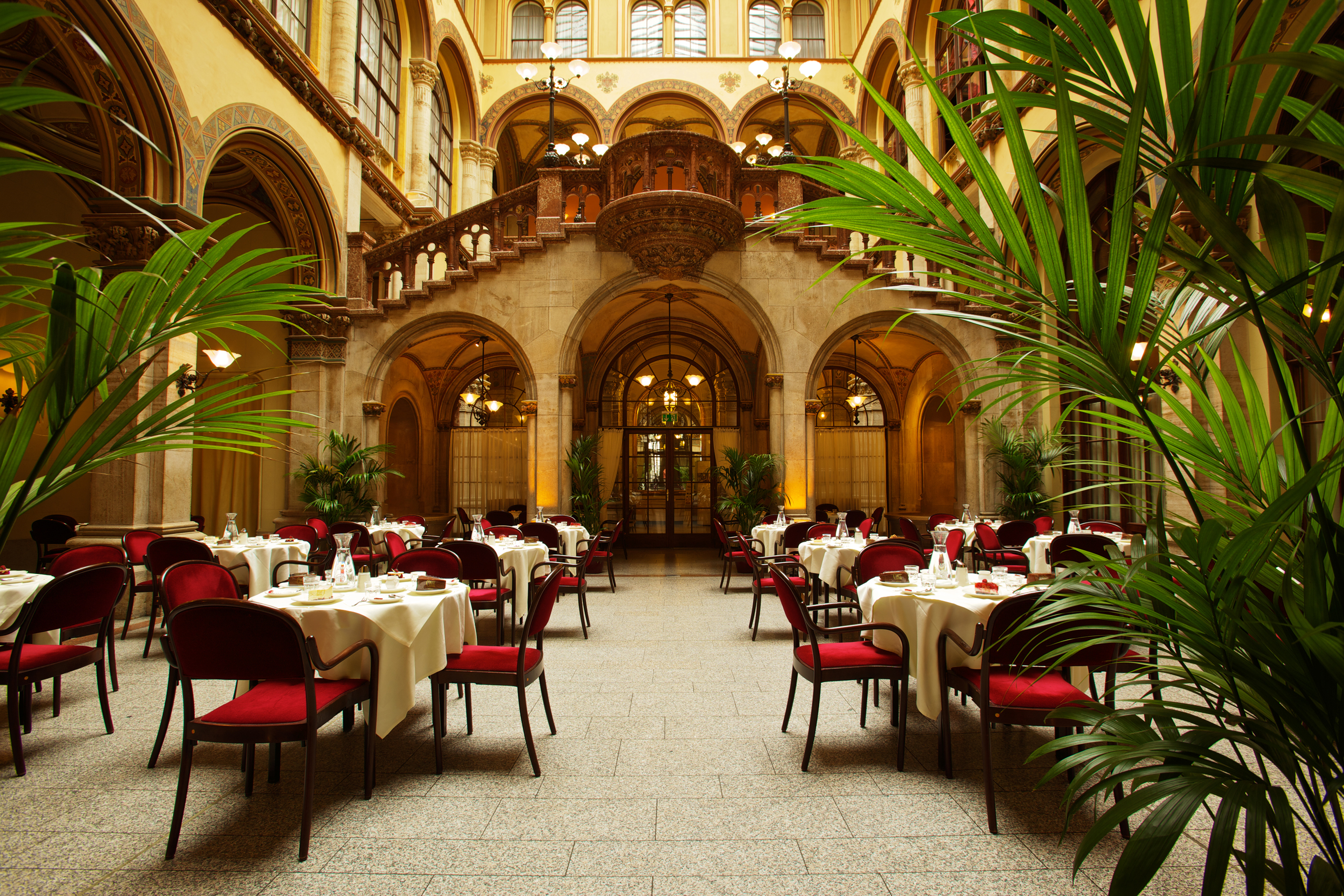 Despite the monumental streets and palatial buildings around the city, historic cafés are the real Vienna landmarks. The Viennese cafés are inspirations for countless coffee shops around the world, and the Café Central is the most beautiful and inspirational of all. Housed in a historic palace, it features marble pillars, grand chandeliers, and arched ceilings that have welcomed intellectuals since the turn of the 19th century.

As is the case with most historic cafés, it now mostly welcomes tourists, but it’s also a local attraction, offering live classical music in the afternoon. 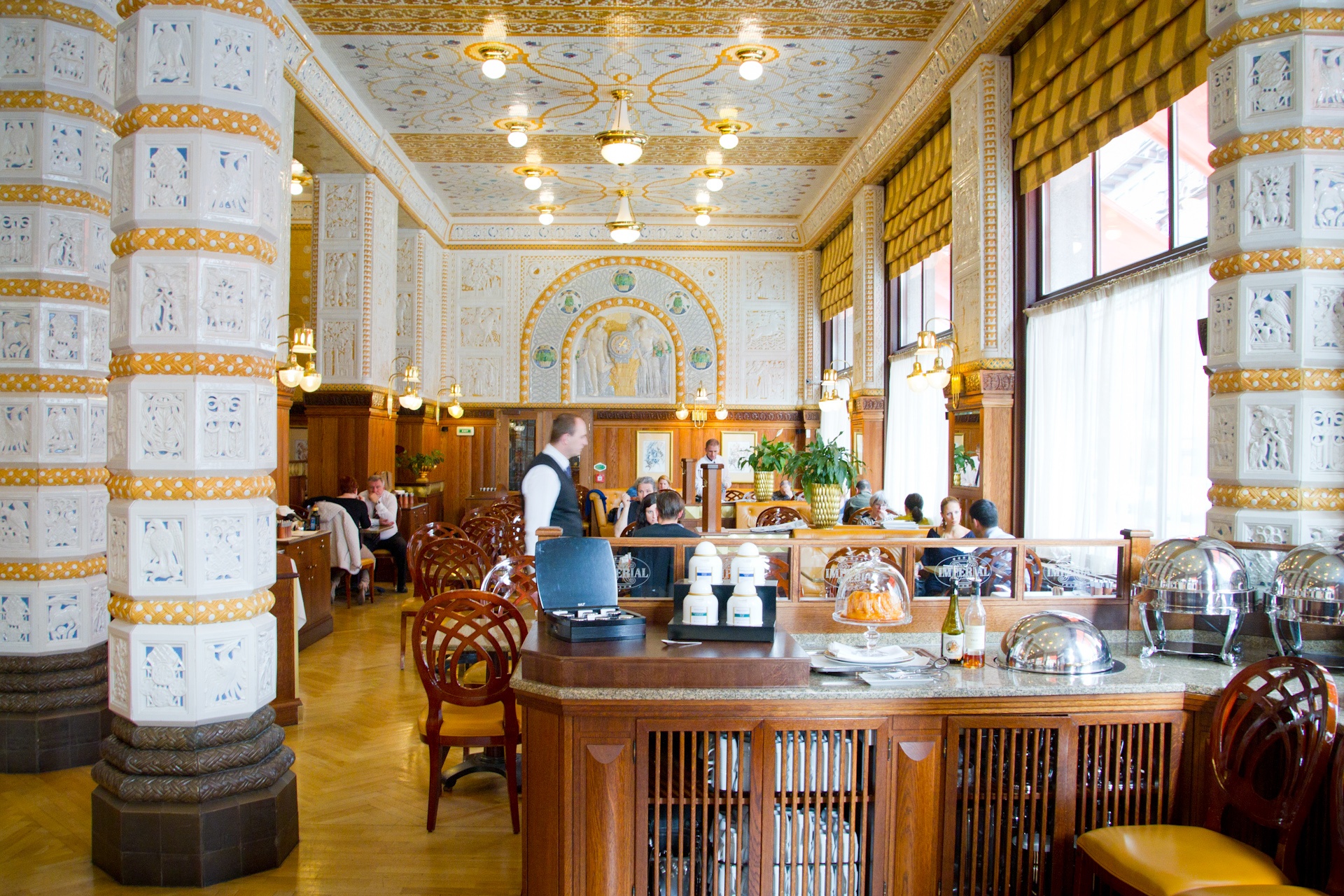 Prague’s flourishing café society of the late 19th century led to the opening of several grand cafés in the city. While many died out after WWII, others have survived and their former glory has been restored.
Café Imperial is the greatest example, known as an Art Deco gem now stunningly brought back to life. Its ornate mosaic and tile-covered interior is one of the world’s most incredibly beautiful backdrops for breakfast in the morning, afternoon tea, or to try a selection of Czech dishes. 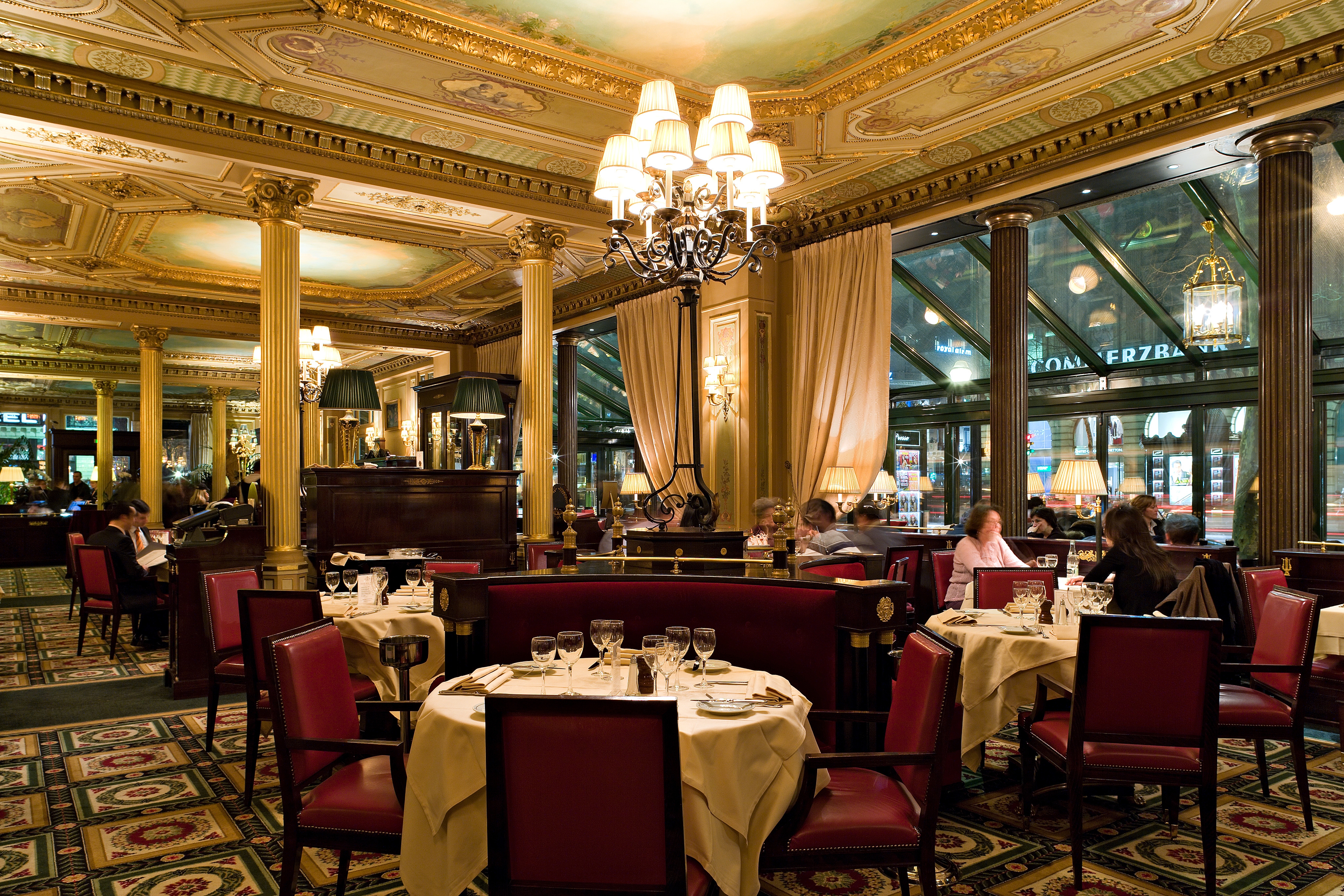 The world’s first café is said to have been Paris’ Le Procope, but the city’s most famous coffee shops are Café Flore and Les Deux Magots. They’re the ones that come in every guidebook and that get inundated by tourists every day. Equally touristy is Cafe de la Paix, but this one is truly worth venturing into, as it has the French capital’s most stunning café interior. It was built by the same architect as the Opera House seen across from it, with an ornate stucco ceiling, gilded walls, and marble tables. Equally monumental are the pastries, often sculpted by local designers. 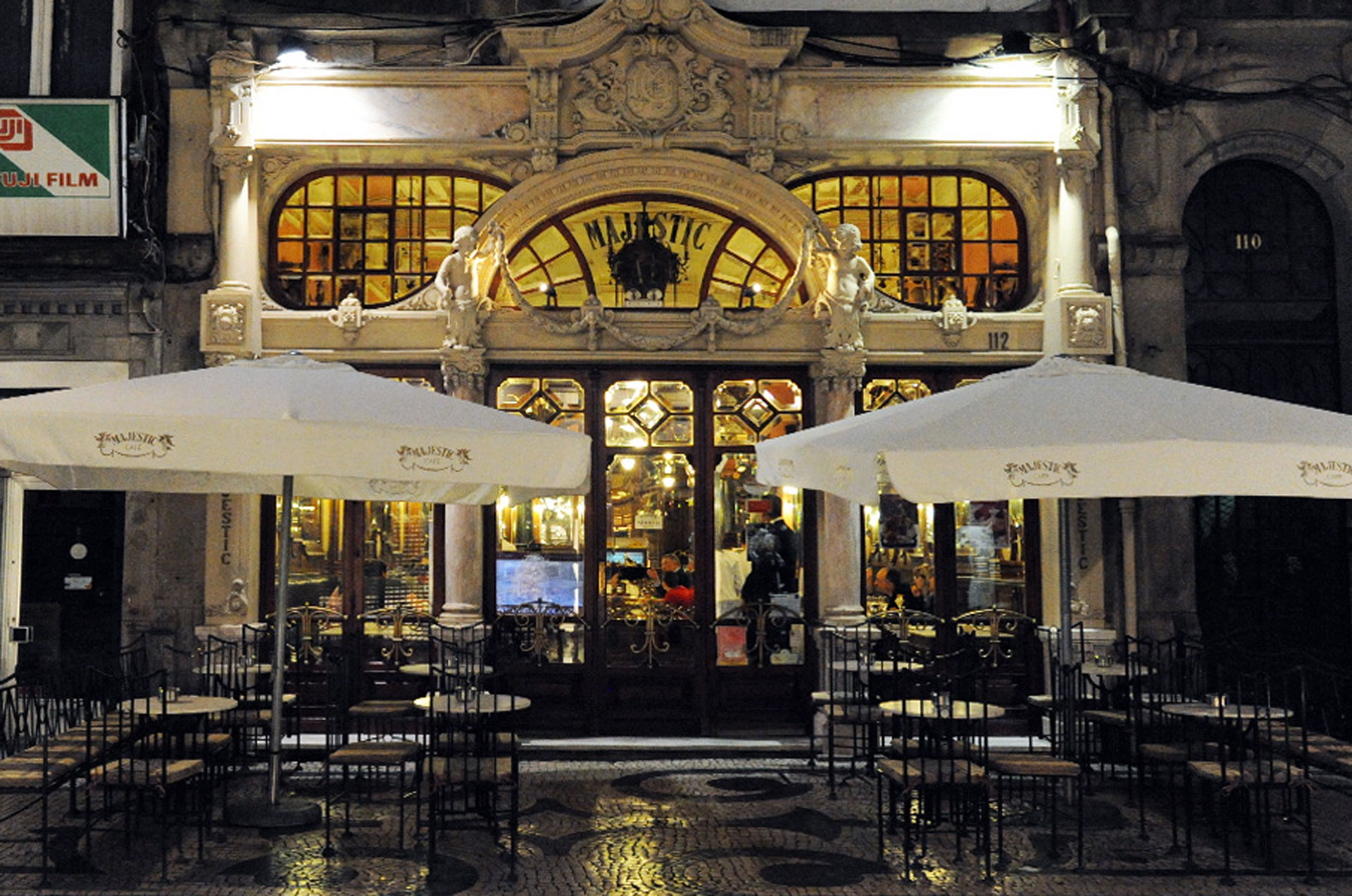 Portugal’s most famous cafés are, naturally, in its capital, but while Lisbon’s Café A Brasileira and Versailles certainly have beautiful interiors, it is in the country’s second city that we find the most stunning of all cafés in the nation and one of the most attractive in the world. From its façade to its interior, Café Majestic remains a beautiful setting for cultural events, making it more than just a tourist attraction. It continues to live up to its name with a wonderful Belle Epoque atmosphere in its main room and attractive winter garden which have guaranteed it a spot in every café-themed coffeetable book. 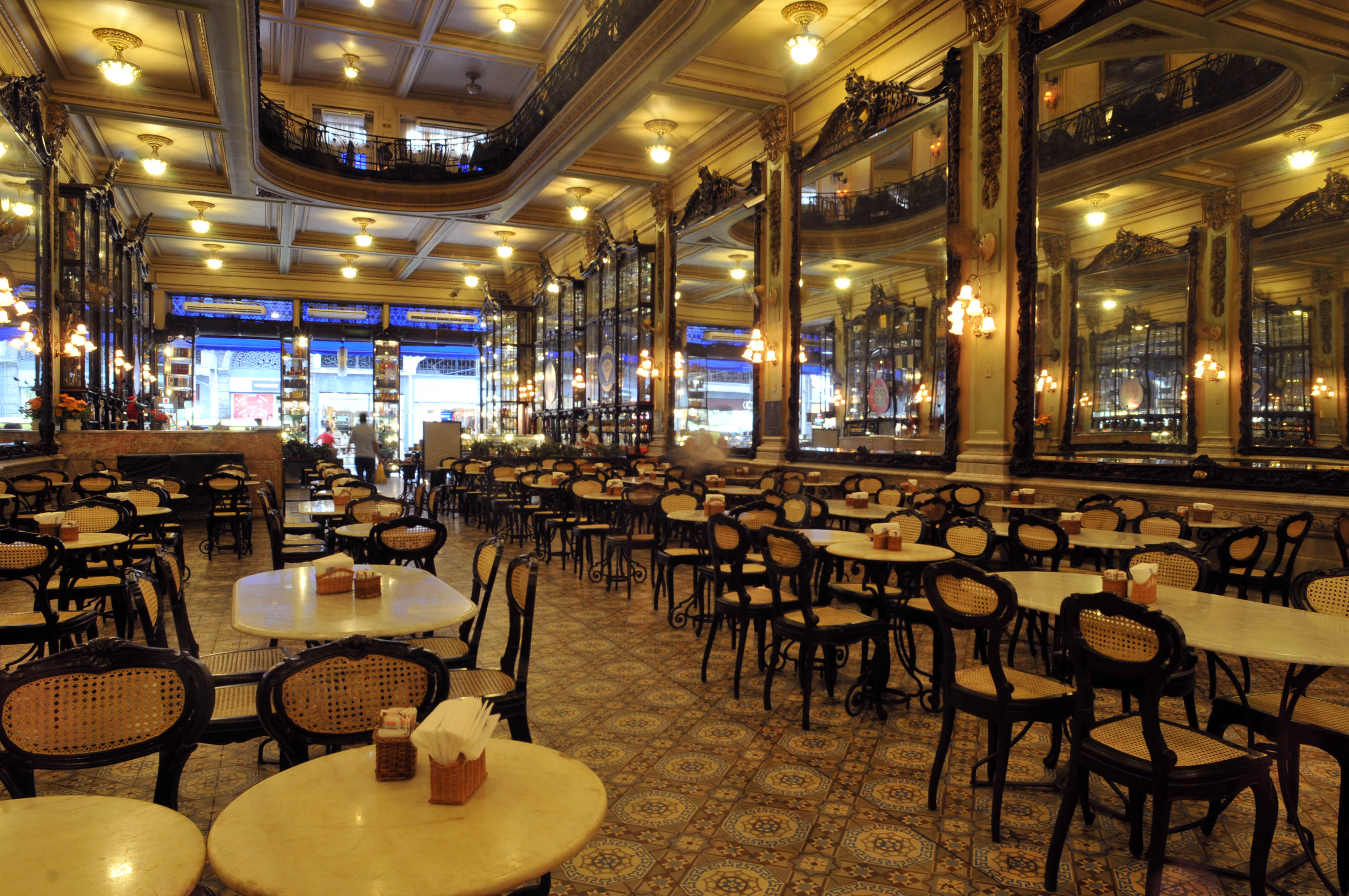 Inspired by the grand European cafés, Confeitaria Colombo was the place to be in Rio at the turn of the 20th century. It hosted fancy balls and cultural events, and was the site of much gossip during the afternoon teas of the city’s upper-class. Its huge stained glass, tiled, and mirrored interior features materials from France, Portugal, and Belgium, all creating an opulent art nouveau space for classic Brazilian and Iberian cuisine, delicious pastries, or simply a cup of tea or the famous Brazilian coffee. 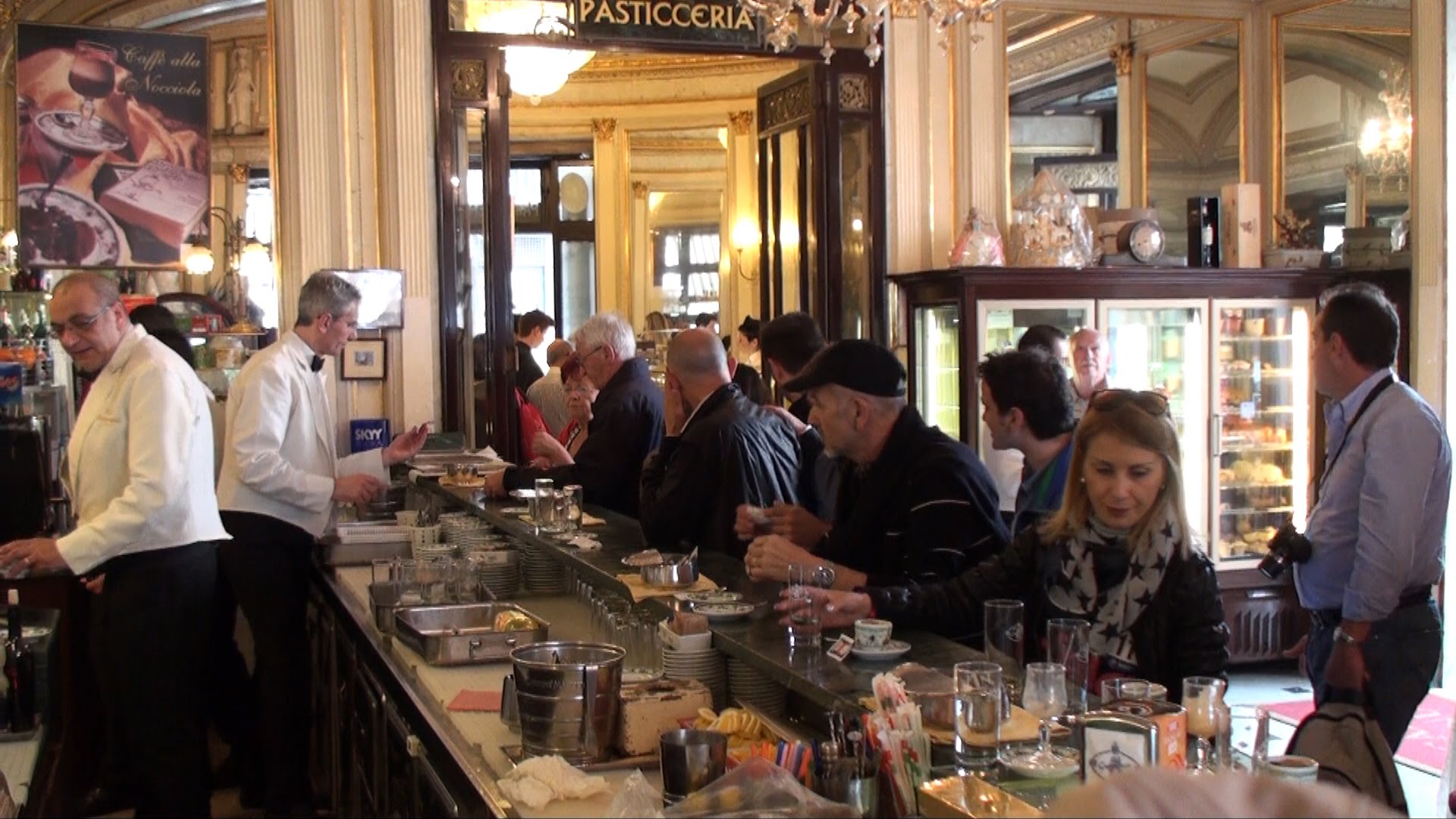 Naples’ Gambrinus is legendary not just because it is the city’s oldest café but because since it opened in the mid-19th century it has welcomed royalty, artists, and celebrities attracted by its beautiful interior.
It includes paintings by some of the greatest artists of the time, sculptures, and a number of antiques to be admired as you sip a cappuccino or try the variety of cakes. Tables are also placed outside, but with such a beautiful interior, it is much more pleasant staying indoors, which is why the café is known as “Naples’ living room.” 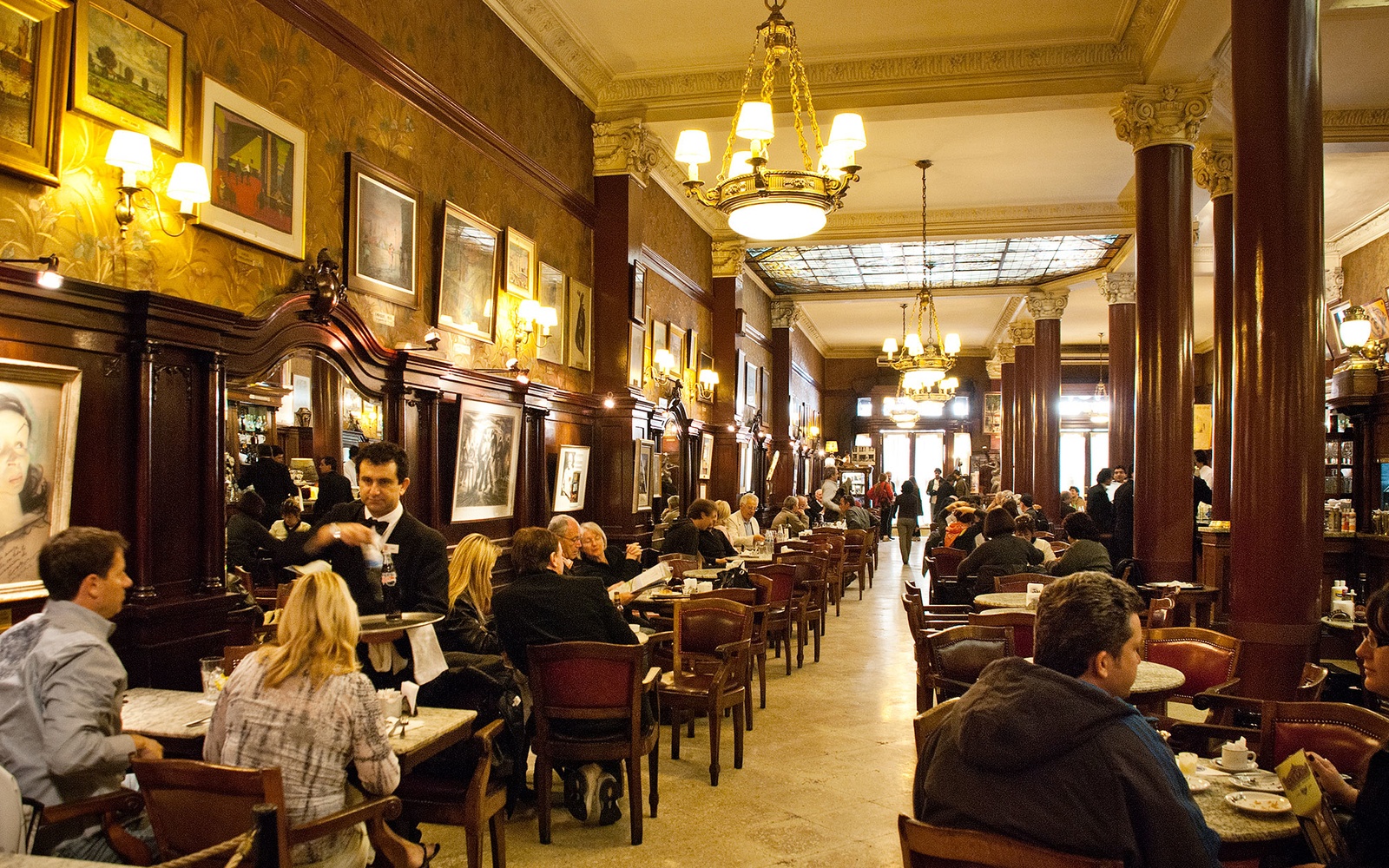 Inspired by late 19th-century European coffeehouses, this art nouveau café became an essential cultural stop in Buenos Aires over the years. Many of the city’s famous names made it their second home, and it remains a must-see for its stained glass, marbles, bronzes, woods, and photos on the walls. In addition to coffee and some wonderful pastries, it also offers tango shows and poetry recitals at night. Locals still outnumber tourists, who especially love the “chocolate con churros” specialty surrounded by the timeless atmosphere. 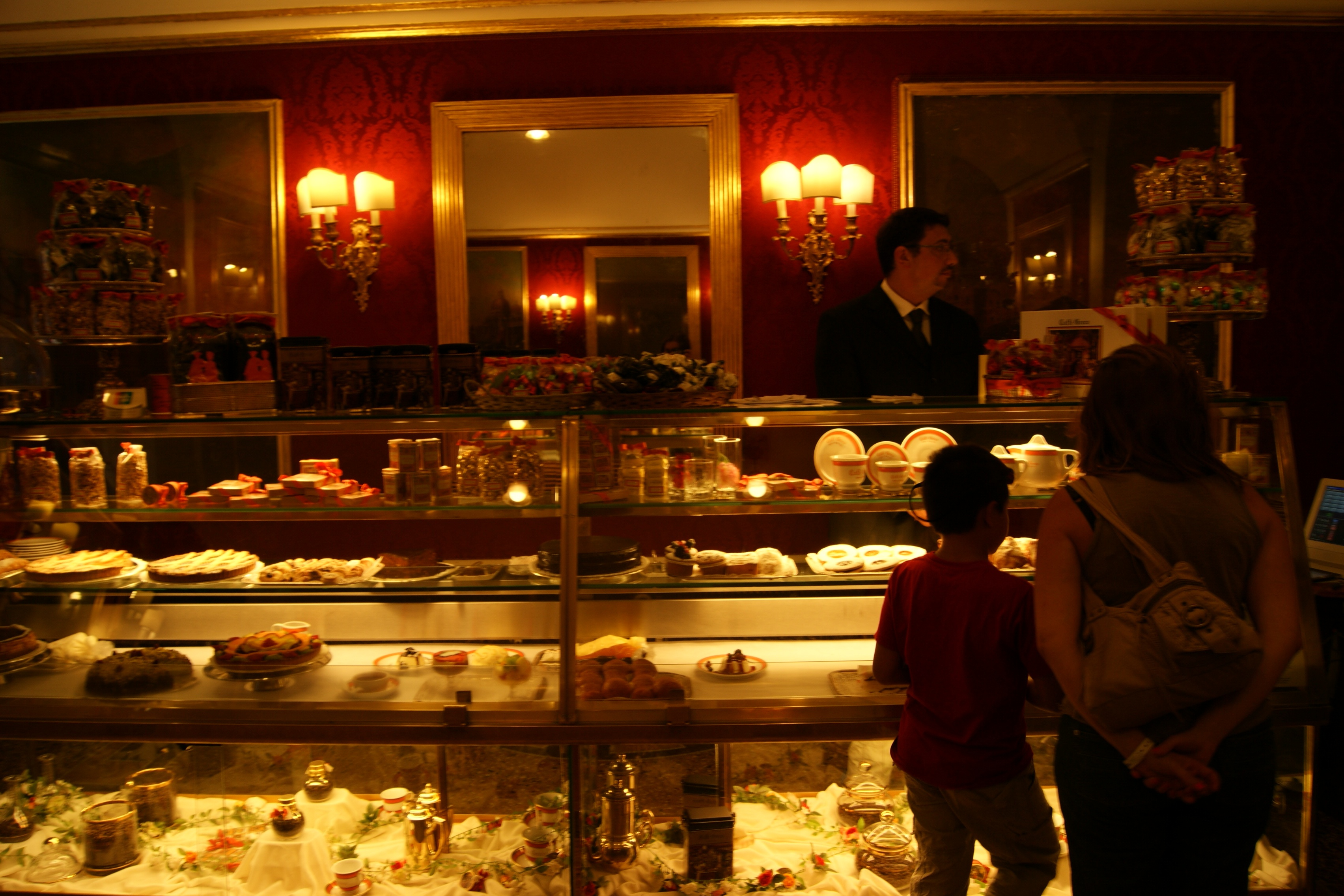 Rome’s oldest and most famous café has served coffee to many of Europe’s historical figures, and remains a haven for intellectuals and politicians today. Its location in the city’s most luxurious shopping street by the tourist-magnet Piazza di Spagna guarantees that it’s always busy and with plenty of atmosphere. The décor is all about mirrors, romantic paintings, gilt, wood, marble, and period furnishings, lending a unique charm to each of the small rooms that make up the interior. 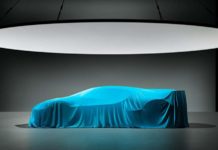 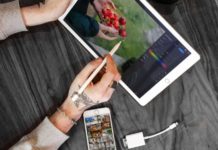 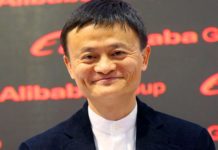 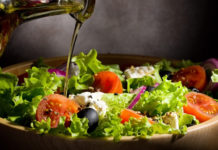