Ever dream about owning something so spectacular it seems out of reach? Well, billionaires are people too and since its introduction in 2008.

The Gulfstream G650 has been on most of their wishlists. This super jet is now considered the quintessential standard in business aviation and has held that title since its inception. It is promoted as the roomiest and most comfortable as well as the fastest. Additionally, it flies the farthest and longest distances of any in its class. It holds up to eighteen passengers and a four-man crew, depending on the configuration the owner selects.

Some of the formations allow for more passenger seating, while others use the space for fewer passenger seats and more births for sleeping. So it all depends on the buyer’s personal requirements when their G650 is ordered.

Some readers don’t realize that Rolls-Royce creates engines for high-speed sports cars, as well as jets. This incredible aircraft is also powered by Rolls-Royce and uses two BR725 engines. These engines are so powerful the plane can hit cruising speeds up to Mach .925 for shorter distance trips and Mach .85 for lengthier journeys. This is yet another feature that no other business class aircraft can boast.

Passengers will be flying as close to the speed of sound on this luxurious and comfy plane. It has a maximum cruising altitude of 51,000 feet (15,545 m), which means it can fly above nasty weather conditions and avoid excessive air traffic. Plus, it can gain that altitude in around 20 minutes, which means it would be a fast ascension to safe skies.

Here is a closer look at this $64.5 million dream-jet to see what all the fanfare is all about. If you’re one of the many distinguished billionaires who want one of these jets, put in your order ASAP, because there is a three-year plus wait. 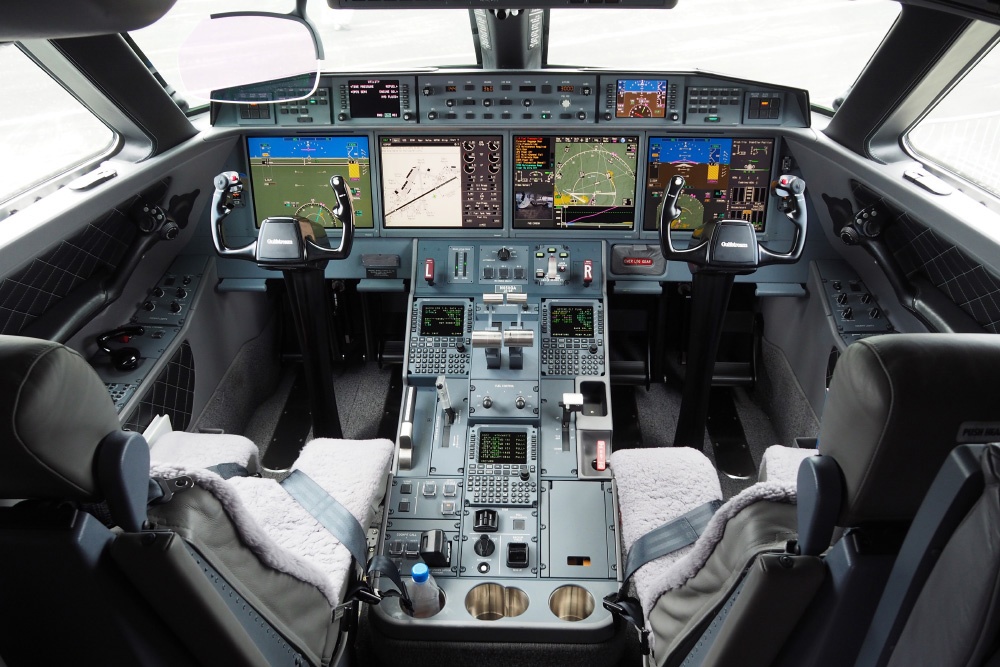 Of course, if you are in a hurry, there are always options – such as buying one from one of the seventeen owners who were smart enough to buy one on sight. Emerald Aviation’s president Ed Dahlberg recently told Bloomberg News they plan to sell their G650 for a $10 million profit. When ordering the G650, future owners must sign a non-assignable contract, meaning they can not sell or give away their place in line. Additionally, the company is carefully watching to ensure investing speculators are not on the list.

Surprisingly, the company also divulged that the 200 plus customers on their list are primarily international businesses, not wealthy jet-setting celebrities and stars. Gulfstream doesn’t divulge customer information, but we have heard that fashion designer Ralph Lauren, Lord of the Rings director, Peter Jackson, Wal-Mart and Exxon Mobil are few of the owners. Most of the other G650 owners are unknown.

The G650 can fly nonstop for a little over 7,000 nautical miles (12,964 km). That means this jet could fly round trip from New York to Los Angeles and still have leftover power to hop over to London. This is exceptional performance and provides its passengers nonstop service that is the ultimate in comfort and luxury. Gulfstream’s engineers made sure they included every detail that would make this plane different and a few notches above the rest.

Some of the high-tech features that come standard on this aircraft are the Enhanced Visions System (EVS) II™, the Head-up Display (HUD) II and the Synthetic Vision-Primary Flight Display (SV-PFD).  That all sounds pretty technical, but those names are simply the brand names of the ultimate in vision and direction control. The aircraft detects the specific terrain below, which means it will detect an approaching elevation change in order to change it’s position, if necessary.

Look at this magnificent cockpit. It’s called a Planeview II™ cockpit and come with a Triplex Flight Management system, 3-D weather radar, advanced flight controls and an automatic emergency descent mode for those sketchy nights in the air. Of course, we hope some of those controls are never needed, it is clear this aircraft was engineered for safety and control in every way. Look at the screen in the middle of the console. It almost looks like a television monitor. That’s actually the view below the nose of the plane. The G650 is engineered for safety and the special camera under the plane’s nose helps to ensure a perfect landing.

The cabin was designed to be roomier and provide extra leg room compared to its business aircraft competitors. When looking at the plane’s specs, we can see why Gulfstream claims the G650 was designed from the inside out to ensure it met the highest standards for interior environmental comfort. It can be configured for conferences, private meetings, sleeping berths and even privacy seating. There are twelve different ways the interior can be configured allowing for a variety of choices.

This jet is clearly the tallest, widest and longest in its class and that spells comfort for its passengers. The interior is nearly 54 ft long and the cabin takes up nearly 47 ft of that length. The width is 8.5 ft and the height comes in at 6.5 ft. That may not sound large compared to a commercial aircraft, but it is considered to be extremely spacious. Additionally, the cabin was developed to use natural light and breathable air that is a much higher quality than air in less expensive planes, which is something most of us have never even given another thought to. 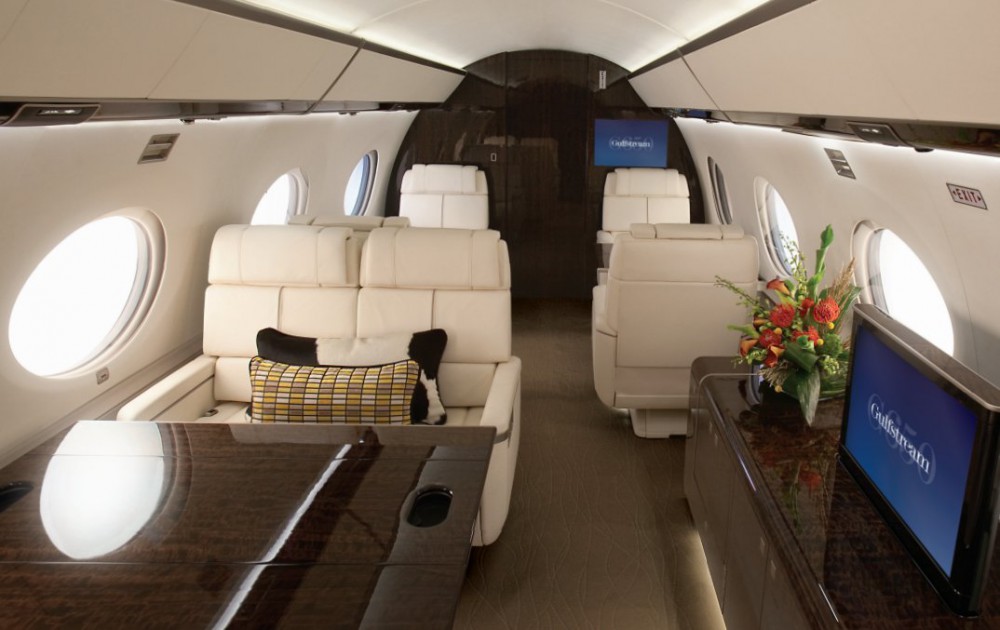 The jet is replete with extraordinary features and uses the highest quality materials and fabrics on the interior. Of course, there are several large-screen televisions aboard for killing time on those long flights. The large bathroom and perfectly sized kitchenette are conveniently located to give easy access – yet are out of the way. The way the interior is compartmentalized gives privacy to each segment.

If you look closely in the picture above, you can see that there is an iPhone app that is used to control lighting, sounds, the window shades and more. It seems there is very little use for a flight attendant on this aircraft, although most billionaires who buy this jet would make sure there are crew members who will take care of its passenger’s every whim. After all, many of these trips will include on-board meetings and work sessions.

According to a recent article in Business Week, the demand for the G650 is so high, the price is expected to increase by another ten million in the near future. It seems the mega rich are now looking at this aircraft as a piece of real estate that can be flipped.

Only 60 of these planes have been manufactured since the G650’s introduction and there is a three-year wait list. British billionaire Bernard Ecclestone, head of Formula One, was the first proud owner to sell the aircraft for a healthy profit. Evidently, it was sold to a Japanese group who was happy to pay the additional ten million. 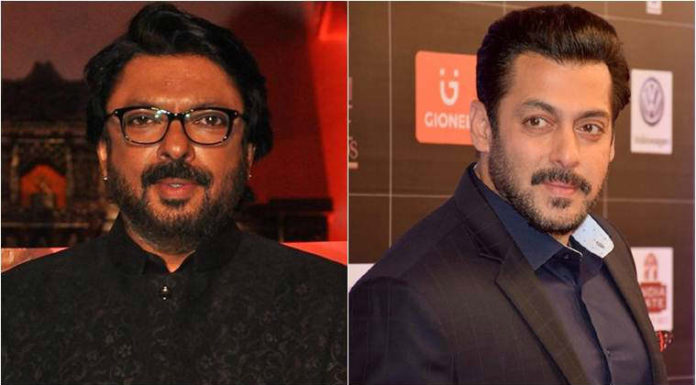